Why you should value your colleagues 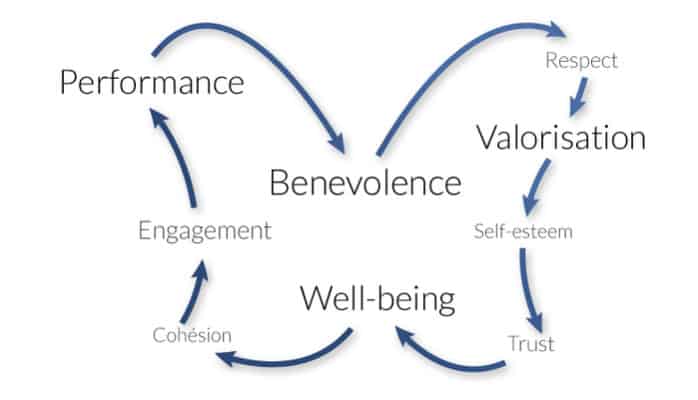 A sensitive proportion of you may think

this is naïve (or worse), but yes, this post is about valuing your colleagues.

Among those sceptics, there will be a huge majority of French, I bet. Being French myself and having spent the most of my time in France working and living with French people, I am nevertheless constantly astonished by our capacity to regularly be pessimistic and negative about everything.

None knows exactly why French people are so negative, but what is likely is that we learn this negative way of life early at school. Most teachers prefer to stress what’s wrong rather than emphasizing what’s OK. You are hardly congratulated for having performed. The usual comments about your work sounds like “not bad, but you could have done better” or, worse “what will we do of you ?” or, even worse (and regardless of your capacities) “if you don’t make sensitive progress, you’ll turn bad”. In addition, being publicly ashamed in front of your schoolchild can happen. This is a shame.

With such an education, it’s not surprising that this apparent impossibility to value people, to simply use positive words and sentences is present as well in our professional life. Valuing someone is definitely not part of our culture. Criticizing people is much more easy for us, notably – but not only – when the object of our critics is not around. Blaming others and rejecting the fault on them is a true, genuine French speciality.

I remember a project where we were 25 so called “top-gun” consultants, however facing difficulties to deliver on time what we were supposed to deliver. Everyone was blaming everyone. No one felt responsible of the situation, especially not the project manager. The atmosphere became toxic very fast.

Let’s be clear : I don’t blame French people for being negative. I deeply think that we all have been educated like this, and that we unconsciously replicate this model like automates.

Actually, despite our negativity, I have recently read a post saying that French people are still the most productive people in the world. This constitues from my perspective just a huge opportunity. Because with just more positive thoughts in our daily work, we could even be much more better.

Principles of the “value” approach

I have had the chance to manage many people in various environments since more than 20 years, and to observe / experiment the same trends :

– people work much better when they’re serene and happy

– people are serene when they feel respected and recognised

– people are more happy if they can trust others

– people are even more happy when they can coach others

As a manager, I have been many times if front of situations where I was told “this guy is useless, dangerous, an ambulant catastrophe, you should fire him”. In 99% of the cases, I did not, fortunately. Before judging and condemning a priori, I have always tried to give a chance. And it worked.

To summarise, I would say that all is about to sincerely value people :

In summary : treat them as respectable, valuable and responsible people.

The benefits of being valued

Valuing colleagues leads to extraordinary results. Each time you value someone, you increase its self-esteem and self-confidence. You literally change people, you reveal them, you boost them. A so-called “useless” can become a good player, and even more.

Well, written like this, I know that this won’t be sufficient to convince some of you. We’ve heard so many times that “a man is a wolf for the man” , that “you don’t have friends at work” and also that “to succeed, you have to be a killer” that behaving with benevolence at work can appear totally out of purpose.

Plus, they are people at work we don’t like, do we ? This is like this, we cant’ be forced to like everyone ! Why would I value people I don’t like ? There are political games. We’re all in competition ! etc, etc.

They are many arguments one can raise to demonstrate that valuing colleagues is just a weird idea, to stay polite.

Let me ask some questions to the die-hard sceptics :

– do you prefer to be valued or to be criticised ?

– do you prefer one tells you the truth or lies ?

– do you prefer to be stressed or to work in confidence ?

– do you prefer collaboration or conflicts ?

– do you prefer to work with top-guns or with weirdos ?

The benefits for you when you value someone

Each time you value someone, actually, you value yourself.

I strongly believe companies that are implementing now a “value culture” will gain soon a terrific competitive advantage. This is why we created ijustvalue

If you want to implement a “value culture” in your company, please contact us or give me a call. We’ll be happy to help you boost your company’s performance while boosting its employees well-being.

Please don’t hesitate to leave a comment below, I’ll be happy to discuss and feed the debate. Have a nice day.

This website uses cookies to improve your experience while you navigate through the website. Out of these cookies, the cookies that are categorized as necessary are stored on your browser as they are essential for the working of basic functionalities of the website. We also use third-party cookies that help us analyze and understand how you use this website. These cookies will be stored in your browser only with your consent. You also have the option to opt-out of these cookies. But opting out of some of these cookies may have an effect on your browsing experience.
Necessary Toujours activé
Necessary cookies are absolutely essential for the website to function properly. This category only includes cookies that ensures basic functionalities and security features of the website. These cookies do not store any personal information.
Non-necessary
Any cookies that may not be particularly necessary for the website to function and is used specifically to collect user personal data via analytics, ads, other embedded contents are termed as non-necessary cookies. It is mandatory to procure user consent prior to running these cookies on your website.
Enregistrer & appliquer